For What it's Worth... here is the story of my Facebook Cover Photo. 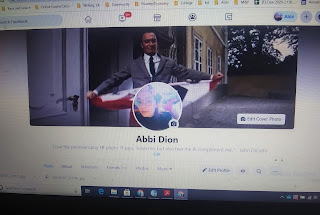 Two years ago, on a dark day in January, I posted this photo -- snatched from the internet, naturally; I confess I recall not exactly where -- and posted it to Facebook as my cover photo. A cover photo of course is that oddly gigantic banner that hangs over (or behind, depending on your device) your personally created and cultivated social media profile. Initially I think I used this space artistically, trying to plop in a fun and vibrant and multi-hued image, something that would read like wallpaper (like, real wallpaper, like, from a shop). Sometimes I chose photos of women taken at odd angles--photos meant to show that the woman was interesting and busy and thoughtful (like, full of thoughts) and not just eye-candy or a vain/desperate housewife, coyly awaiting your compliments. Occasionally I posted snippets of text. Poems. Lines from plays. Celebrities laughing. (I am obsessed with shots of celebs laughing.) 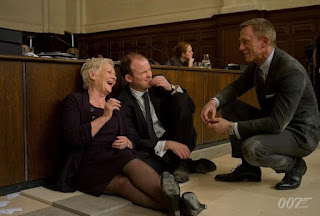 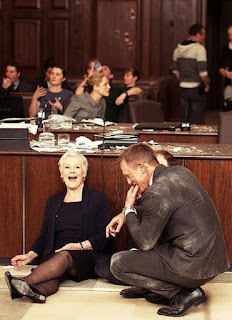 This entire post could be devoted to an academic, critical theory-style conversation on the notion and nature of cover photos -- but I don't feel like subjecting you to cruel and unusual punishment, so I'll switch topics now.
At the two-year mark of Donald Trump's tour as President, I came to the frightening conclusion that the man, his crew, and all the enablers were not quite playing with the same copy of "Idiots' Guide to the Constitution" as moi. I was never a Trump supporter, on any level, but I'll admit, I did not think he was the devil (a friend of mine said in 2016, with full sincerity, they thought he was the antichrist). I thought he was a pretty big talker, perhaps a crude loser, and seemingly willing to stoop to any level to get what he wanted -- but, well, I'd known men like that, and a few women. They couldn't get too far on their own. (Could they?) I tried to think of my loathing for him from the perspective of those who loathed Obama (i.e., I didn't like it when people posted nasty and trashy screeds about Obama, so I'll try not to do that about Trump). Again, initially, I truly did not think he was a total madman; a traitor; an installed useful idiot; a monster; nor did I think he'd be someone who wouldn't be unwilling to let those who knew better--essentially do his job. I thought he'd be happy to hand the actual duties as assigned over to someone more qualified. Meanwhile, he'd be the face. He'd get the attention. He'd do jack shit for work, but that, frankly, was a relief. To him. And to us.
Then bad things started to happen. Like, really bad. And I'm not just talking about his verbally abusive tweets or ugly comments to female reporters. About two years in, around the time of the child separation policy, I started to really worry. It was clear. He wasn't just a pathetic, immoral, poorly read dickhead. He was a criminal. Like, a war criminal. And, I thought, what the hell are we going to do about this? In fact, lost quite a few nights of sleep from worrying about this.
I also felt the fear that many had when the question came to mind: What if those who support him, what if those people don't see this? What if they see it but don't SEE it, what if they make excuses for it? What if people can't accept that they bet on someone who was a con artist, and that they got conned? What if they are clinically unable to see him for who he is.
This worried me. 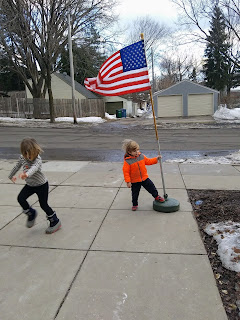 my kids :)
Then one night I found myself watching The Sound of Music. It was a Friday and everyone was asleep. But me. I think I was watching it because a former professor named Susan Power once told me she loved it and watched it every year. So, that night it occurred to me that I should be doing that (i.e., watching it every year). So I bought it on Ama-death-zon and pressed play. I won't regale you with the plot, though it's based on a true story and real people, and the details are worth knowing. But I'll just start at the point in question and I'll leave you there.
This scene happens about three-fifths of the way through the... film. (To be honest, I'm not sure if I'm remembering it right because every time I've tried to watch this piece of crap since, I get to the "Favorite Things"/jumping on the bed number and then just say, I can't! I can't do it. I cannot go any further just now (ever).
The Scene: Captain Von Trapp (Christopher Plummer) arrives home at his place of residence. Or perhaps it's a place he'll just be staying at temporarily (?) Unclear. Anyway, upon coming to the front door he notices a Nazi flag hanging over the dooryard. (I don't know what a dooryard is, I'm just saying these things.) And here's the important thing. Do you know what Von Trapp does? He jumps up, grabs the flag, yanks it off its moorings, and rips it the fuck up. Then he carries on with his day. 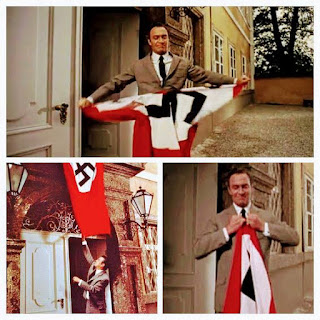 So. Why? Why did this scene grab me, intensely, and not let go? Why did I later go searching for stills from this scene? Why did I find several, stitch them together (digitally... come on now) and then adjust the lighting?
I did this because it occurred to me that Captain Von Trapp yanked that nasty ass wig down before the horrific hell that was to follow had even happened, or meaningfully been implemented. He did it before the major horrors of the Holocaust. Before WWII had been declared. Before people were pleading for international intervention. Before it was fricking cool.
I kid with that last line, but I hope you know what I mean. I mean Von Trapp had the #BLM sign in his yard before it was *safe* and before getting psychic permish from everyone on the block and before such signs were dotting real nize zip code lawns like some kind of conspicuous consumption (social justice edition). He did it because he hated injustice. He hated arrogance. He hated nazism and nazi ideology. He hated power-hungry, false-pride-filled, oppression-loving, colonizer-aspiring, mother-effing D-bags. 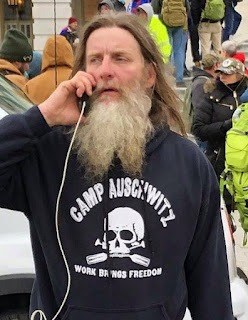 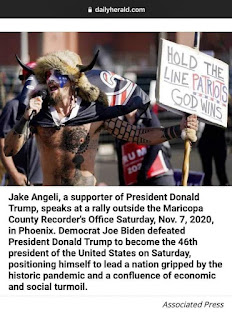 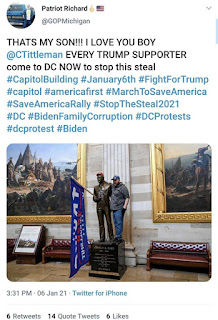 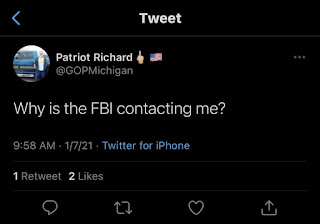 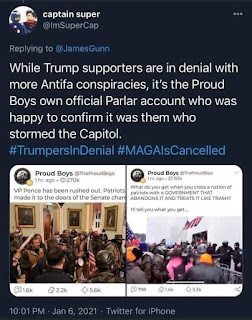 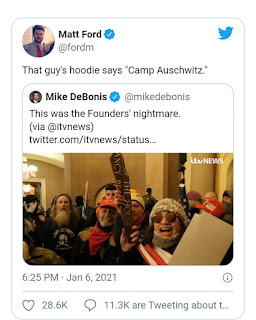 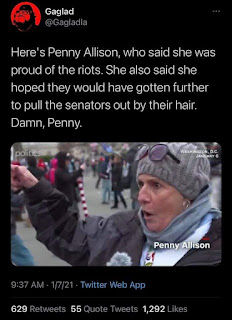 He wasn't feeling that. And he didn't make sure social media, or the latest hashtag, or even the majority of people living in Austria agreed with him. He likely knew, in fact, that many did not support his (Von Trapp's) disdain for Hitler, nazism, fascism, disgusting, corrupt, fear-mongering, double-speaking, or human rights-violating symbology.
But he knew something was wrong with it. And he wasn't going to be complicit.
He didn't wait until Hitler had two weeks left in his contract. He didn't wait until the majority of the people were willing to publically denounce Hitler. He didn't wait until he had to hide under his desk and toss a make-shift gasmask around his noggin and army crawl to the Keurig.

He did when the writing was on the wall but before the crisis was in full swing. Ripping the flag down in 1945 would've been good, too. But it would've been something else. It would have been... less.
Anyone who claims they are 'shocked' by what happened at the U.S. Capitol is likely just speaking quickly or rhetorically. They can't *really* be shocked. If they are, then all I can think is one or more of the following applies: 1. they are truly unable to read, listen, or think (I'm not being cruel; I'm speaking honestly) or 2. they are desperately oblivious (due to magical thinking (in a bad way), or brain-washing) or 3. they've heard too many Sean Hannity monologues to think straight (I guess that's brain-washing) or 4. (or is this 3 now?) finally, or else they are lying/walking it back/feigning something. And if they are doing that? If they are being disingenuous, well... that kind of thing insults them -- and us.
Who could have seen this coming? Everyone. This is the most shocking, most tragic, least surprising thing I’ve ever seen.’ — Stephen Colbert
I'm not here for any politician or cabinet member or Regular Joe who wants to say: "This is unbelievable." Nah. It's perfectly believable. There should be no shock about the dangers Trump (and co.) posed. None. And if you really and truly are only SEEING it now... well, I'm sorry. But that is inexplicable. And I am going to need more of an explanation for how you didn't hear or see four years (on top of a lifetime career) of human rights abuses, civil rights abuses, runaway racism, greed, profiteering, sexism and sexual abuse, ableism and mockery of those who were different than him--especially those who fall under protected category statuses. You didn't read HIS OWN tweets? You didn't notice his demonstrably false claims? His abusive nicknames? His repeated and unforgivable words about immigrants? You didn't hear him berate our free press? You didn't see him walk out of interviews if they didn't go his way, demand parades in his honor, and ignore a pandemic because he thought it took away camera time from... him? You didn't see the videos of him treating women like they were nothing more than receptacles for his... whatever. You didn't follow the news to witness how many of his team were not only charged, but found guilty, and sent away to do time? You just kinda missed all that or...
Yeah. I don't get that. And for his team -- a resignation now is not only not #BRAVE, but it's also not cute or honorable or redeeming.
Frankly, it is not enough. 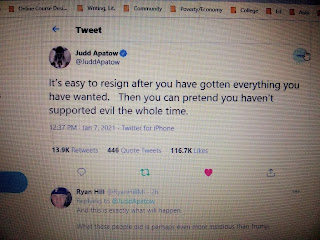 I'd love to make this a real-deal-type post with: citations, embedded and endnoted; specific historical references, place names and dates of battles/events/etc; and examples of others who, like Von Trapp, said "na-ah" to warlords and d-bags before it was the name of the game... But I cannot do all that now. It's midnight. I need to get to sleep. Trust. If you have the time and the knowledge and the insight -- I'd love to read your thinkpiece (or post or meme) on people who had nothing to gain (and often everything to lose) from saying/doing the right thing. Those are the real ones. 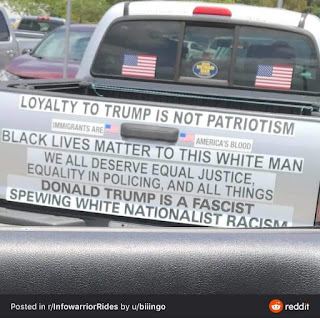